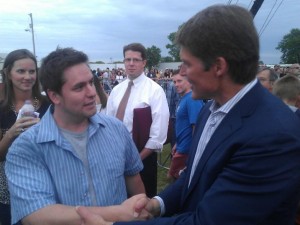 A national leader once said “All politics is local.” The true power behind our culture and way of life is our local government, and I believe that to my core. No president, congress, governor or state legislature can match the power of neighbors making the most practical of all decisions on a weekly, or even daily basis.

Local politics is often motivated by one of a few things. Some just love to be involved, others have higher aspirations and need a training ground. Still others rally around a single issue and run to fill a seat to push – or stop – an idea they do or don’t agree with. Then there are those who consider it to be the most important duty of all: simple, civic responsibility.

I have no aspirations for higher office, and I don’t believe single-issue candidates are any better than single-issue voters. So I enter this race, not as an advocate for a pre-determined cause, but to help set an example to my son, and hopefully others, of someone who has a lot of opinions, then backs it up where it counts: being involved.